Millennium Hope Hills is reusing the space that the Great East Japan Earthquake and Tsunami made uninhabitable by providing six parks (Ainokama Park, Fujisone Park, Ninokura Park, Hasegama Park, Kabasaki Park, and Shinbama Park) and related garden paths in an area around 10 km of coast. This development lessens the force of future tsunamis by using garden paths to connect hills; this feature is called green coastal tide embankment, and hills can also serve as shelters during emergencies.

The debris* from the tsunami is evidence of the many lives spent in this place. It was used as the foundation of the hills to memorialize the tsunami and reflect the emotions of those affected by it. The result is a memorial park that preserves the remains of the communities as a way to disseminate the memories of the disaster and the lessons learned from it, both domestically and internationally. It also serves as a place for disaster-mitigation education.

*Earthquake and tsunami debris
This debris comprises the remnants of houses and other buildings that were destroyed by the 2011 earthquake and tsunami. Around 90% of the debris recovered from Iwanuma?around 574,000 tons of material?was recycled and used in the construction of Millennium Hope Hills.

The name "Millennium Hope Hills" stands for the hope that children will live here happily for another thousand years.

The city of Iwanuma is trying to implement multiple defenses against tsunamis under the theory of disaster mitigation. The lower portion of the logo represents just that, showing cross-section views of (from right to left) coastal tide embankment, the Millennium Hope Hills, the Teizan Canal and the elevated road "Tamaura Hope Line".

With these four lines of defense, the hope is to create enough time for residents to flee from tsunamis. By increasing the number of roads that run from the coast inland, more people will be able to take shelter at once.

The Millennium Hope Hills is the heart of this multiple-layered defense system, as embodied in the logo's design.

Hills representing the reconstruction of Iwanuma are being built between the Iwanuma coast and the Teizan Canal*. Along a roughly 10-km stretch of coastline, 14 hills (including existing ones), connected by 3-meter-high garden paths, are being developed. With the support of people from all over the world, about 350,000 trees have been planted between 2013-2020. In the future, these trees will grow into a green coastal tide embankment that protects the residents of the city.

*Teizan Canal
This is the longest canal in Japan. It was built over a period of about 280 years, starting during the reign of Date Masamune; Teizan is the posthumous name of this widely popular lord. 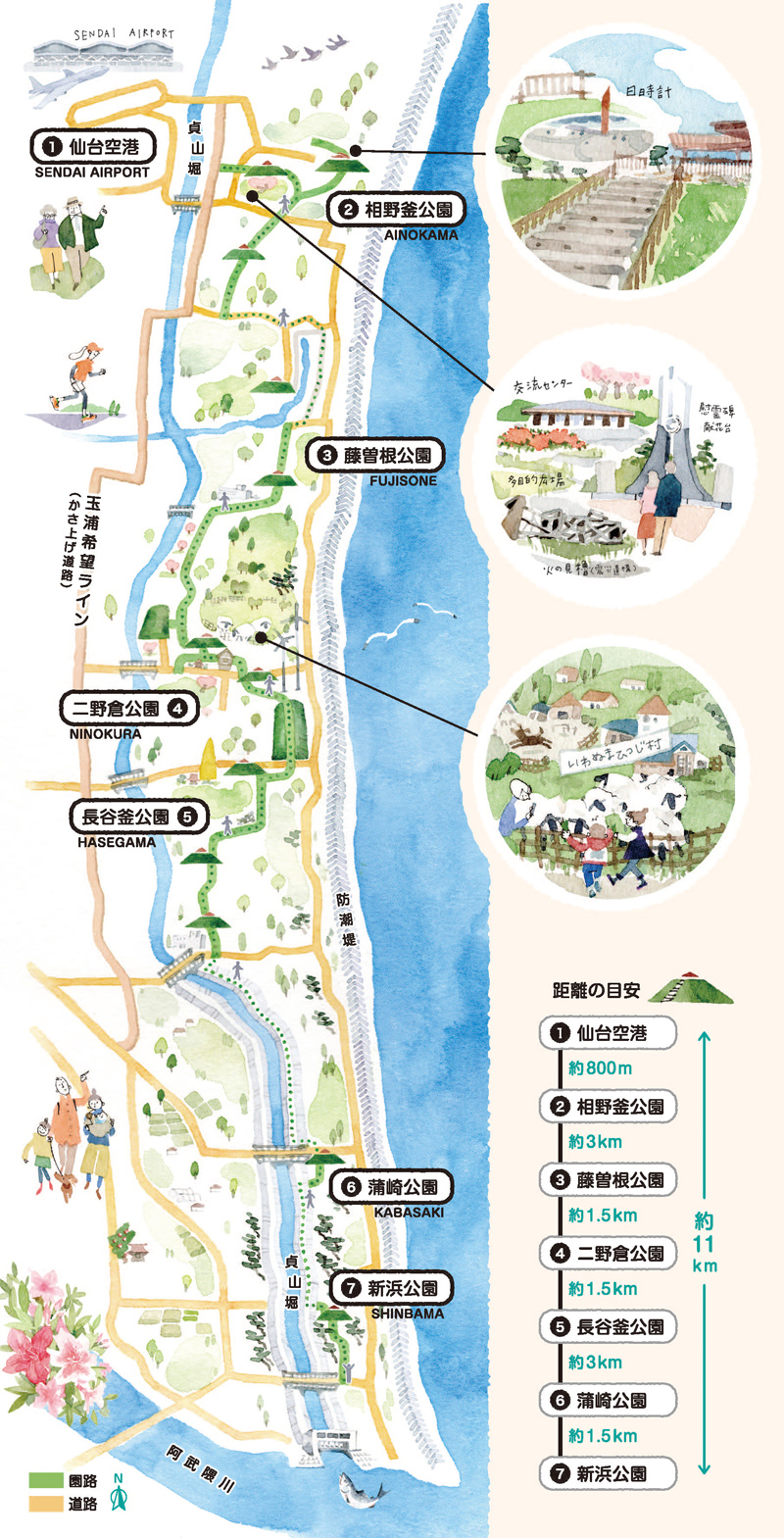 A section view of the garden path

Volunteers from all over the country have planted nursery trees in this area since 2013. The thick, multispecies planting (the Miyawaki method) will re-create a naturally selected forest. In 15 to 20 years, these trees will become a forest, thus helping to reduce the power of tsunamis as part of a green coastal tide embankment.

The kinds of trees being planted